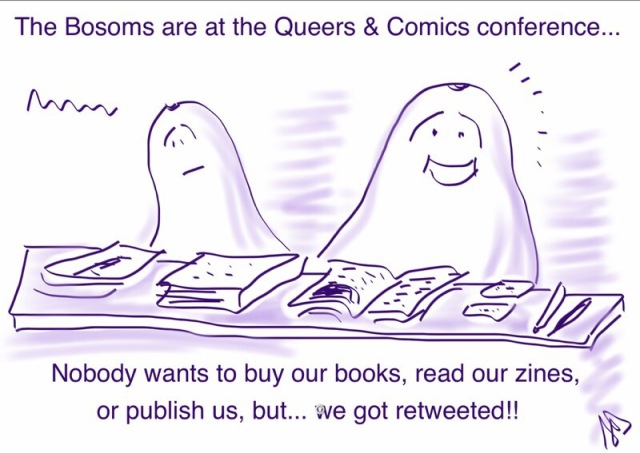 A small short update from me in New York: there is just SO much going on, both in my mind as well as around me. I have much pondering and reflection to do. Last night Alison Bechdel spoke on how gay acceptance has now entered the mainstream, and how this takes out much of the charming edgyness of being in a struggle and doing art about it, so now what? This remains unresolved, although ofcourse you could say that any GOOD art will continue to be worthy, and that making stuff from a non-straight or non-cis perspective will always be valid. Still I will have to start thinking on where to go with Comics from here.
Apart from these existential art questions, this has been the most LOVING conference thing I have ever been to and it was great to meet and mix with older generations of LGBT cartoonist, of whom Robert Triptow was the one I connected to most closely because we shared an apartment and he turned green with food poisening one evening. I didn’t know much about the pioneers of ‘gay comix magazine‘ but now I’m glad I do.

The Netherlands just feels so goddamn small and insignificant, although: fame is relative! On a sidenote: I hardly know any of the physical bookselling/magazine printing big shots here, but I _do_ know the poor non-publishing webcartoonists who’s stuff I’ve seen through the more accessible world wide web, ha!

Photo: Jennifer Camper interviews Howard Cruse and Alison Bechdel. I took this picture, proving I was there 😀